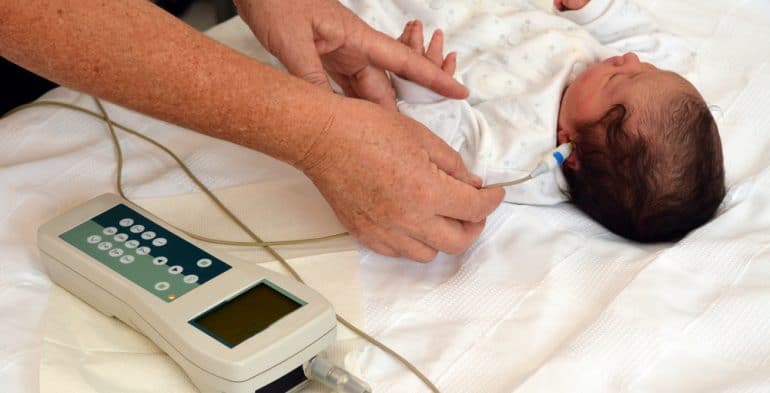 The purpose of newborn tests is to pick up as early as possible any underlying diseases likely to affect your baby. Most of these disorders are genetic and run in families. The tests are usually done before the baby leaves the hospital.

What are the most common newborn screening tests?

Congenital hypothyroidism affects approximately 1 every 4,000 babies. Most children with it who are not identified and treated promptly after birth develop, learning problems and other neurologic abnormalities. Children with congenital hypothyroidism who receive oral thyroid hormone in the first weeks perform normally or near-normally on intellectual testing later in life.

Babies with PKU lack an enzyme called phenylalanine hydroxylase needed to process phenylalanine, an amino acid in the diet. This defect causes accumulation in the blood stream and leads to brain damage.

A baby with PKU is given a special formula and later is a diet that is low in phenylalanine. Dietary reatment started in the first few weeks of life can prevent the consequences of the disease and avoid the brain damage and learning disabilities.

This disease due to lack of an enzyme needed to process the sugar galactose. This inability causes failure to thrive, vomiting, cataracts, progressive liver disease, and mental retardation. Death often results from bloodstream infection with the bacteria E. coli

The elimination of galactose from the child’s diet, by avoiding milk and milk products, leads to dramatic improvement and in time the clinical consequences of the disease decrease or disappear.

Red blood cells in babies with this very important genetic disease become sickle-shaped after they give up oxygen to the tissues. The sickle-shape cells can become stuck in blood vessels causing pain and organ damage. Recognition of the disease soon after birth is important since children with this disease are much more likely to develop severe infections, experience great pain, organ damage, and strokes. Appropriate treatment can prevent or lessen these problems.

The laboratory test for sickle cell disease is also designed to screen for other disorders (such as thalassemia and hemoglobin E) of hemoglobin (the oxygen carrier in red blood cells).

Maple syrup urine disease (MSUD) is an inherited error involving the metabolism of the branched chain amino acids that results in mental retardation and sometimes death. Damage from MSUD can be minimized by a special diet.

Homocystinuria is a genetic disease in which there is deficiency of an enzyme. The disease results in mental retardation, eye problems, skeletal abnormalities and stroke. These problems can be prevented or diminished by a special diet and high doses of vitamin B6 or B12.

Biotinidase deficiency is a genetic disorder in which there is a deficiency of the essential B vitamin biotin. This results in frequent infections, hearing loss, uncoordinated movements, seizures and mental retardation. These dire consequences can be prevented by giving the baby extra biotin.

Congenital adrenal hyperplasia (CAH) is a genetic disorder affecting one baby in 5,000. It is due to defects in the production of adrenal hormones. Severe forms can cause life-threatening salt loss. Treatment includes replacement of salt and the missing adrenal hormones.

Pronounced EM-cad, this is a genetic disorder in which there is deficiency of an enzyme needed to convert fat to energy. The child may seem perfectly normal and then suddenly have seizures, respiratory failure, cardiac arrest, coma and die. Treatment of MCAD includes frequent intake of food (or glucose) and avoidance of fasting.