Many children in the Arab world are raised in the embrace of grandfathers or grandmothers or in the care of domestic help so that their parents can work.

But is there danger in this? How cautious should you be when it comes to others watching over your child?

There are no official numbers in the Arab world regarding the number of grandchildren being raised in their grandparents’ care. But the number in the United States, where communities are not often based on strong family ties, indicates that there are 3 million grandfathers and grandmothers raising their children.

In our Arab world, a proverb summarizes the relationship between grandchildren and grandparents: “There’s nothing more precious than the child, except the child’s child”. This saying has been passed down for generations, but while the child-rearing and emotional habits of grandparents may be based on it, it may not be appropriate.

It is still important, too, to pay attention to the health and psychological state of the grandfather or grandmother, as it may prevent them from effectively watching over the children in the absence of their parents. 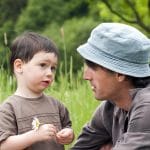 Family Help?
The important role of parents in discovering speech delay in children