Fever – what you should know about fever in babies and children 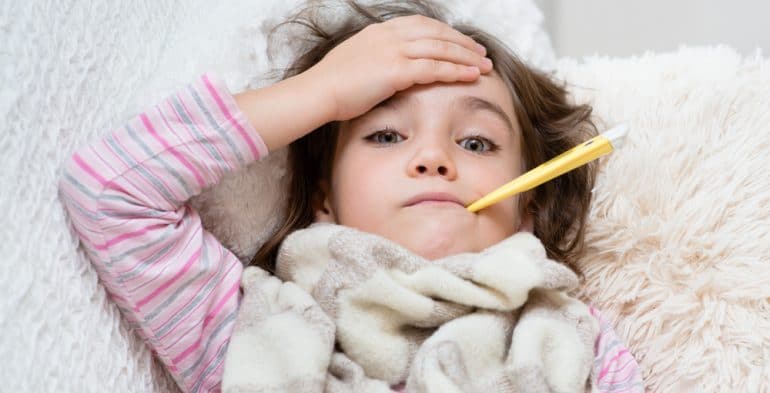 Fever and Your Baby or Child

By itself, fever is not an illness it is a sign or symptom and shows that the body is fighting infection caused by a virus or bacteria. Fever (a high temperature) stimulates certain defenses, such as the white blood cells, which attack and destroy invading bacteria. Also germs like a steady body temperature and your body varies this in it’s efforts to get well.

Fever most commonly accompanies respiratory illnesses such as:

It also may occur with infections of the bowel, blood, or urinary tract, inflammation of brain and spinal cord (meningitis), and with a wide variety of viral illnesses.

Although it is sometimes helpful to feel your child’s forehead and compare this to your own temperature the best way to test for fever is with a thermometer. Put the thermometer under their tongue or their armpit and ask them to clamp it there.  You should leave the thermometer in place for at least 3 minutes to get an accurate reading and remember to disinfect it well before and after use to prevent the spread of germs.

Heatstroke is a rare but serious problem that is easily confused with fever. Unlike fever the condition is not caused internally by infection but by the surrounding temperature. Simply put the child gets too hot because it is too hot where they are. It occurs when a child spends too long in a very hot place, like in the sun on a beach or a very hot room.  Sadly a common cause is leaving children unattended in closed cars and this has caused several deaths. Don’t leave your child unattended in the car, even if just for a few minutes!

Febrile convulsions usually only happen in children between six months and five years, the convulsions tend to run in families so be aware of your own and your partners health history. If neither of the parents have suffered these they are less likely in your children. Your child may look vacant or strange for a few moments, then stiffen, twitch, and roll their eyes. They will be unresponsive for a short time, and their skin may appear to be a little darker than usual during the episode. The entire convulsion usually lasts less than a minute, and may be over in a few seconds, but it can seem like a lifetime to a frightened parent. Although uncommon, convulsions can last for up to fifteen minutes or longer. It is reassuring to know that febrile convulsions almost always are harmless—they do not cause brain damage, nervous system problems, paralysis, intellectual disabilities, or death—although they should be reported promptly to your pediatrician. If your child is having trouble breathing or the convulsion (also referred to as a seizure) does not stop within fifteen minutes, call your doctor

If your child suffers with febrile convulsions and are younger than one year at the time of their first simple febrile convulsion they have around a 50 percent chance of having another one at some point. However the convulsions are unlikely to cause any other health problems. The convulsions can look similar to epilepsy and many parents worry that a febrile convulsion will lead to epilepsy. However epileptic seizures are not caused by a fever, and although statistics seem to suggest there is a slightly higher risk of children with this condition going on to have epilepsy, the risk is very low, and you should not worry.

How to care for your feverish child

To help keep your child comfortable, you should:

Always get medical advice if:

you have any concerns about looking after your child at home