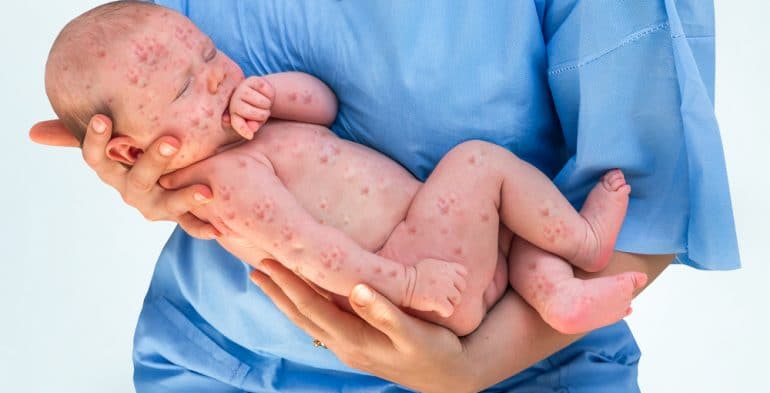 Chickenpox in children is usually a very mild disease. It occurs less frequently in older children and adults, but if they get the disease, it is more extensive and causes a lot of discomfort to the patient.

Chickenpox is a viral infection and highly infectious. If one child gets the infection at home or in the school, those in contact with him are likely to contract the disease after a period of 2 to 3 weeks. As the disease usually confers lifelong immunity, you are safe if you have had it before.

Signs and progression of Chickenpox in Children

Often, the first thing you will notice are one or two tiny blisters on the back or chest. The child is otherwise normal. New blisters appear rapidly. The blisters form crusts or scabs. Some children, especially older ones, may get high fever and look quite ill, while younger ones may have low fever or no fever at all. The rash of chickenpox usually begins within a day of the onset of fever, in the form of red spots that itch. Within a few hours, they turn first into small pimples and then into blisters on a red surface (almost like a dew drop on a red leaf). The spots are very itchy. The blisters with clear fluid become cloudy within a day and then become crusted. While this is happening, new red spots or blisters may be noted in the nearby area. Typically, in a small portion of the body, you may notice the rash in different stages — the red spot, the clear blister, the cloudy blister and the crusted one — at the same time.

The rash is mostly confined to the chest, back, face and head. The legs and hands are generally not involved. Spots may also appear in the mouth and vagina. Small glands often develop at the back of the neck and the armpits. The total period of the illness is about a week to 10 days. While the disease may initially be confused with insect bites or pimples, the rash of chickenpox keeps changing its characteristics very fast, while insect bites or pimples do not follow this pattern.

Once all the spots become crusted and no new crops appear, the patient is no longer infectious. They can infect others from a day before the spots are first noticed to the day all the spots are crusted. Once that happens, the child should be ready to go to school and play with other children. Unfortunately, in some schools, the child is not allowed to join till all the scabs or crusts have fallen off. It is to be noted that whereas the scabs of smallpox, which is now eradicated, could infect others, those of chickenpox cannot. Interested parents may consider meeting the school authorities in this connection so that children are not unnecessarily kept away from school.

The spots of chickenpox are very itchy. A daily bath helps because sweating increases the itching. Keep the child’s nails short. Explain to an older child that he should avoid scratching because it may leave behind scars. For smaller children, mittens may be used at night. Plain calamine lotion applied to the spot also reduces itching. It is not advisable to use calamine mixed with other ingredients. If the itching is very severe, your doctor may prescribe an antihistamine preparation to be given by mouth. If the fever does not bother the child, avoid using any drugs. If required, a paracetamol preparation may be used to lower the temperature. Never give aspirin to a child suffering from chickenpox or influenza, because it may lead to a serious disease called Reye’s Syndrome. No diet restrictions are required. The child should be allowed to eat his usual healthy nutritious food. Try to encourage your child to eat even if they are not hungry. The body needs nutrition to fight infection.

Complications in Children and women during Pregnancy

While chickenpox is not a serious disease, complications like pneumonia and encephalitis can sometimes occur.
If a pregnant woman gets the disease in the first three months of pregnancy, there are 2% to 3% chances of her baby suffering a birth defect. A newborn is protected from getting chickenpox if his mother has had chickenpox in the past. But the risk of a newborn getting the disease is quite high (about 50%) if the mother develops chickenpox within 5 days before or 2 days after the delivery. A baby whose mother develops chickenpox after delivery may be given chickenpox immunoglobulin, if available. These babies should be kept away from other children for 3 weeks. If the mother has had chickenpox, her newborn is protected for about 6 months. Such a newborn can be brought home if the older children are having chickenpox. If the mother is not sure if she has already had chickenpox, the newborn should be kept away from the older children for about 2 weeks.

A particular drug for the treatment of chickenpox is reserved for special situations to be decided upon by your doctor. In any case, it is really effective only if the drug is started within 24 hours of the onset of the disease. Antibiotics are also of no use in this viral infection except in rare cases where secondary bacterial infection might have supervened.